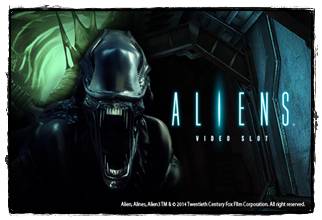 Aliens from NetEnt is based on the same movie from 20th Century Fox. This game is an experience not like anything else. They work their way through levels to finally meet the queen of Aliens in a settlement. If one makes it all the way and win the queen so will be richly rewarded.

The game has received several awards last year. 2015, just how innovative and advanced it is – to be just a gaming machine. Aliens slot game is a 5 reel machine with three different lines – the idea is to combine various symbols to build up profits quickly and increase the level and fight against various aliens. There are three different levels you must fight their way through before finally meet the queen, “The Search” – “The Encounter” – “The Hive”.

Aliens is a slot machine with 5 reels and 15 paylines. Aliens slot game takes you into a dark world where you must be razor sharp and your fingers should be ready on the trigger, while you rinse you in the way through waves of alien attacks to reach the Queen’s stay; The Hive. You get 3D graphics, three action-packed levels, wilds, re-spins, the ability to collect multipliers and the promise of a slot machine out of the ordinary. Your views are first-hand from the camera on a marine soldier’s helmet and looks much like an awesome FPS games.

The software is from Net Entertainment, which this time has switched itself on all levels. The graphics are dark but super nice and combined with a cool sound side, it’s almost as if you are in the middle of one of the four Aliens movie. There reigns a nasty lawsuit and you are entertained all the way through. Right now, the best composition of a cult film and a game! 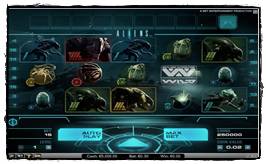 You’re a Marine on a mission. Aliens are swarming up all the places from and to carry out the mission you must find the Queen live and kill her! There are in all three levels, you must implement. Level 1: The Search – The goal of level 1 is to fill your ‘Alien Activity Meter’ with the greatest possible multipliers. These will namely be used at level 2 in order to be able to expect a victory. And believe me, you may need some real big multipliers and serious ammo! It’s location to 9 symbols in your ‘Alien-Meter’ and you get put into a symbol every time you hit a winning combination. Do you drive a spin and did not win anything, pulled it a symbol on your ‘Alien-Meter’.

Level 2: The Encounter – At level 2, you fight your way in through a dark corridor and foam while you shoot all the aliens you encounter on your way. The bigger the multiplier and the more ammunition you received from the first level, the better you want to make it here. You have several types of weapons available, and you should be through the 10 steps to reach the Queen’s stay.

Level 3: The Hive – The decisive phase. Here you must kill the queen to carry out the mission. If you are lucky, you will be rewarded with 5 re-spins, which gives you more powerful ammunition. You can now destroy the queen’s stay with a single grenade and thus get maximum profit!

Aliens is an impressive slot if you look at the visual. However, it becomes tedious right in the long run because there is a real FPS mode where you have no control. There is chance that control, just like in any other game machines even if it looks very real out. It must also be said that it takes a lot of patience to get to the hive-mode, but you can do so as expected it properly high profits. Speaking of profits, it is also the right time between them, but when you win you win more. Some players like this, but I prefer to win less, but more often. A slot on the other hand is really good on film theme is Terminator 2 where, while not a direct bonus game, but the feeling is much better then the soundtrack is there from the start.