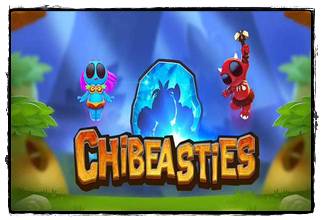 Do you like slot machines with mystical themes, enchanting environments and exciting creatures that get thoughts to wander to life on other planets, you should definitely check out Yggdrasil Gaming’s slot Chibeasties! This is a super charming slot and as usual, Yggdrasil at that little extra, a game that stands out and that is very nicely done. Yggdrasil has made himself known to offer quirky themes with exciting characters and creatures in an innovative gaming spirit. Chibeasties is no exception!

Chibeasties from Yggdrasil is the perfect slot machine for those who enjoy slots with a bit more mystical themes. The game has a lovely character of adventure and mystery, and we do think that it can appeal to the majority, even if the graphics can be seen as a bit naive. Among the bonus features of Chibeasties are wild symbols and free spins. The former is a highlight, but the free spins round is not of the picks either. Read more about the bonus features and the game as a whole below.

Exactly what a “chibeast” should be said we do not know, but by their enormous eyes to judge, they are probably aliens of any kind. Anyway, the cute little creatures that are easy to like (even more so if they give you big profits, of course). Four of the symbols formed by these creatures / aliens, while other symbols in the form of plants and other things that live in the magical forest.

The graphics are playful, just like in other slots from Yggdrasil. We may think that Yggdrasil could have done the graphics a bit more lively and also pulled up the resolution part, but there are niceties. The background music is perfect for the game. If you think of a soundtrack for an adventure movie matinee upsetting you understand approximately how Yggdrasil has in mind with the music. The game is in 16: 9 and is programmed in HTML5, which means that it works well on mobile phones and tablets.

Chibeasties has a similar configuration as the majority of Yggdrasil’s other slots. This means that the game has five reels and 20 bet lines fixed across three lines. The fact that the lines are fixed, so you only can change the coin value. You have a tremendous amount of coin values ​​to choose from to customize bet quite as precise. Minimum bet is low £0.2 while the maximum bet is £40. 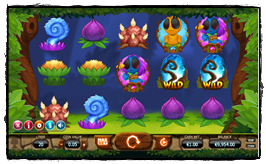 This slot is based on a story of quirky characters who live in a magical forest. Altogether there are eight unique characters and symbols that spins around on the 5 reels and creates profits by line up on any of the 20 fixed bet lines. Chibeasties are colorful characters with big black eyes and the sound works with graphics to put on a little mysterious and exciting atmosphere that invites to a high level of entertainment. Besides entertainment so we also serve many chances to win in this game that has a theoretical payout percentage at an impressive 96.2%.

Chibeasties has a traditional wild symbol that substitutes for all symbols in the game except the scatter symbols to assist you in the creation of profitable combinations. Scatter symbols in the game starts between 10 and incredible 40 free spins when you get 3, 4 or 5 of the field of play at the same time. As with many games from Yggdrasil, they can not help but throw in a fun extra features in their free spins and Chibeasties consists surprise that one of the symbols chosen to become an expanding symbol each time it appears in the game. A payout is made when the first of the original game plan, then expands the selected symbol to cover the entire wheel and more profitable combinations created so winnings are paid again.

Chibeasties pay on average over time 96.20% of the action in the form of profits. It’s no huge stack percentage, but it is not bad by any means. Maximum profit is 750 x 20 coins, that is 15.000 coins. Do you gamble a bit higher coin values can thus play home over the equivalent of £10.000 in a single spin. Chibeasties is the perfect game for those who appreciate a bit quirky themes with much color and movement. Yggdrasil also invites the free spins with a function for expanding symbols helps to give you even more profits so if you have not played this game, it’s now time to test tour in Chibeasties!