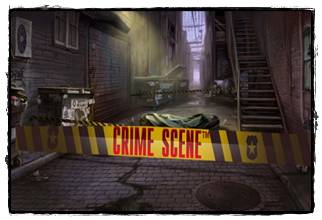 If there is something that both books TV schedules are filled today, it’s different detective novels and crime series. People of all ages seem to appreciate the drama and excitement found in such novels and TV series, just as they seem to think about the possibility to get to play policeman and try to solve the mysteries home sofa. It is not surprising that the detective theme, therefore, also have come to the world of gaming machine.

Crime Scene is a slot machine where you may enter into the role of detective at a crime scene. The game turns sympathetic to those who enjoy the detective story is exciting, but even if you are not otherwise addressed by crime series, you should take an extra look at the crime scene, because it’s a slot machine with a bonus game that really does not really blasts.

Not all places on earth you could imagine to have a honeymoon at. The alley in the Crime Scene slot game is one of those. Here, a murder was committed and it is now up to you as a seasoned detective to look for evidence to nail the culprit. To help you have a police team, technical equipment and of course, your acumen. Good luck! Crime Scene is a video slot that has five wheels, three rows and 15 paylines. You can bet between 1 and 10 coins per payline and the coin size can be adjusted between £0.01 and £1. When you play on all paylines simultaneously, this means that a game round will cost anything from £0.15 to £150.

Custom icons in crime scene consists of 10, J, Q, K and A, that is, the highest values ​​of the playing cards. Besides these, we of course also have symbols with the game’s theme to make such weapons, technical aids and cues. Most valuable is the bloody footprint! In the good old NetEnt spirit so naturally also includes crime scene a couple of special features. Among other things, the machine integrated bonus as well as a feature called Sticky Wilds. 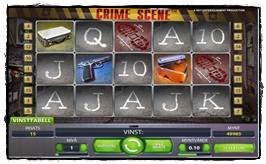 The bonus game is activated by three hand prints, regardless of the position on the board. In the bonus game you should click on the number of bags to collect as much evidence and money as possible. The more evidence you collect, the higher the profits you get. This is a very good and exciting bonus game that has some similarities with the competition ‘Deal Or No Deal’.

Crime Scene is another great slot game from Net Entertainment. The only negative could well be the sound that quickly becomes tedious and a bit strained. On the other hand, the sound is authentic and as taken from a crime scene. The jackpot in the Crime Scene is located at 22500 coins which can represent as much as £22500, nearly a quarter million in other words!