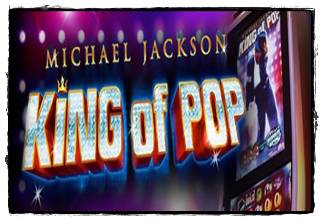 Now the game manufacturer Bally released a class games and this game is based on one of the world’s most beloved pop artists. Of course it’s about Michael Jackson – also known as the King of Pop. And not surprisingly called Bally’s new slot just Micheal Jackson – the King of Pop. Whether the now late icon was one of your favorite artists or not, you will probably be mightily impressed by the slot machine with the same name.

Michael Jackson – King of Pop is a wonderful, action-packed game with glittering symbols and a number of exciting features. The symbols in the game consists of the usual letters as A, K and Q, but it has also brought the things that was very symbolic for the right Michael. We refer, among other things, on the famous white glove, heel shoes, hat and sunglasses. In other words, it’s a whole lot of symbols that fill this musical slot.

To make the gaming experience complete Bally has added a great soundtrack playing in the background while you spin the reels. Some of the Michael Jackson songs that roll while you win money in the palace’s Billie Jean, Dirty Diana, Bad and Smooth Criminal. The game is equipped with 25 pay lines, five reels and three lines. 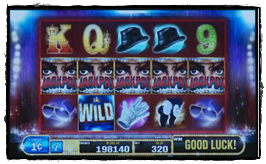 New Michael Jackson – King of Pop holds two wild symbols. It’s about Moonwalk Wild and Stacked Wild. The former may occur in row two to five, and this is totally random. When this occurs, the wild symbol replaces all other symbols except Bonus and Jackpot. If you manage to pinpoint a winning line where a Moonwalk Wild included so your winnings will be doubled! When you play this slot from Bally, you can then also get the so-called Stacked Wild. These symbols have the same function as the Moonwalk Wild with the difference that these symbols extends over an entire wheel. These precious symbols, however, only occur in two rows.

This slot machine also holds Scatter symbols that can give you high profits. The characteristics of these symbols is that you see Michael Jackson’s eyes and tress in the box and it says “Jackpot” symbol. You get two Scatter symbols during the same round of play, you will get paid the bet x2. This increase, however, as you get more Scatter symbols and succeed you pinpoint the entire five symbols in one spin so paying the game out an incredible 2,500 times your bet! Michael Jackson – King of Pop is also equipped with an exciting bonus game that we know that many will appreciate. If you manage to get a bonus symbol in the middle of the reels 2, 3 and 4, bonus mode will be activated and you will receive a spin on the so-called wheel. This spin can give you free spins, lump sums or a new spin of the wheel stuck with multiplier activated.

If it turns out to you in the bonus situation have access to free spins, it’s about ten rounds. There are two different free spin modes and the first called “Beat it Free Games” and during these free spins you can collect wild symbols which will then remain for all the free spins. However, this applies only on reels 2, 3, 4 and 5. The second free spins mode in Michael Jackson – King of Pop’s words Smooth Criminal Free Games and looks a bit different. Here you get five free spins and during the first spinning wheel will number 5 to be filled by a Stacked Wild. Then move the stacked wild symbol for every free spin you spin in the game. In other words, your chances of winning increase every time you spin. In addition, both reels 1 & 2 to be stacked wild stuffed under your last free spins.

We at BonusesCasino.co.uk is of course mightily impressed by Michael Jackson – King of Pop. Partly get the entire game added value while at the same time as you play to hear all the awesome songs of the pop icon. But then so impresses Bally really with all the lovely features, bonuses and free spins. In addition, the game is designed glitter and you become the least in a good mood when you sit and spin. Actually, you can not wish for much more as a player. Except where the big profits will fall into which they unfortunately did not just when we tested the game!