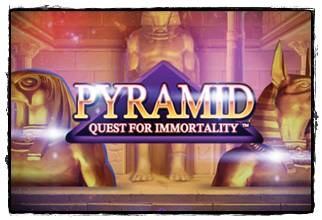 Now you finally have the chance to feel the ancient Egyptian mystery in a new video slot from none other manufacturers than Swedish Net Entertainment. As you probably know, the producer put a lot of time to create a whole in their game that offers a gaming experience beyond the ordinary. Of course, this also applies to the new title Pyramid: Quest for Immortality. Again, you put time and effort into great detail as well as sound and music that gives that little extra. Not to mention the delicious design of the game and a new twist on avalanche function previously been seen in popular Gonzo’s Quest.

There are many slot machines which comes from NetEnt that quickly turns into success stories out there on the internet. For just a little while ago was released Pyramid: Quest for Immortality slot to all casinos that have signed a partnership with the Swedish game manufacturer. There was no exception for this slot immediately became a popular and well-used slot out on most casino sites. The slot machine has some lovely special features that we believe is the key to why the Pyramid: Quest for Immortality is so popular slot.

The design and layout of the Pyramid: Quest for Immortality is of course a really high level and an exciting way of playing. Instead of classic spinning wheels, it has a so-called “avalanche” function where the symbols fall freely down on the court instead of the spun forward. There are five descending lines of a different approach on the lines. Usually there are 3 Symbols per line, but NetEnt has here struck with a specials where only the outer rows has three symbols, the two second outermost lines has four symbols and the middle line has five symbols, like a real pyramid in other words! Very clever and innovative as usual by NetEnt.

The symbols on the game is of course the theme of ancient Egypt. Cleoptra, Tutankamo, Ra and Anubis are all with the slot, with other classic symbols beetles and golden eagles. This slot has a lovely background music that really fit to make even greater excitement in the slot. 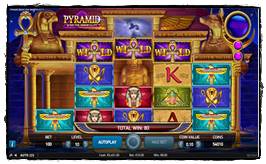 The Pyramid: Quest for Immortality, you who say the head to Egypt and its great pyramids for a brand new game adventure. And it teaches that hit you first of all is the game’s structure. “The wheels” in this case can be called a mere bars and they are designed like a pyramid. Reels 1 and 5, namely three rows of symbols while the reels 2 and 4 has four rows of symbols and reel 3 has five rows of symbols. Once again NetEnt test of their creativity and innovation!

Since it was after this function avalanche. This means that the symbols fall into their places, like an avalanche. Create winning combinations symbols disappear, leaving room for new who enters its doors. It simply becomes very exciting and a bit different! But it’s actually not all! The Pyramid has also added an avalanche multiplier. This will increase by 1 for every 3 avalanche occurring in a row. If you are lucky, you can get up to a multiplier of the entire x10!

Last but not least, we have a wild symbol and always replace all the other symbols to make you have more chance of winning combinations. But even this symbol has been given a slight twist in the form of a wild-generation. This means that a symbol that lands above the reels 2, 3 or 4 and is in a winning combination will be turned into a wild symbol for the next avalanche.

If one were to summarize this new awesome game from NetEnt it’s probably that it’ll be a new favorite of many players. It is neat, well made, exciting and creative! Perhaps some may lack any form of bonus games – which undoubtedly would have fit in. But Pyramid is definitely worth trying a few times. And you do not like the game you can enjoy the benefit that it will open a new casino games on the same date next month!

Pyramid: Quest for Immortality gives me mixed feelings. What I like slot is avalanche-operation with the falling blocks instead of spinning reels and the graphics on the slot. But the theme and bonuses on the slot does not feel particularly innovative. Today there are a large number slots about just ancient Egypt and its gods, and bonuses are nothing like blowing a chair. Large gains are, however, and win, and the quality of the slot is really good, then you are a fan of pyramids and ancient Egypt, then this slot is guaranteed to be something for you.