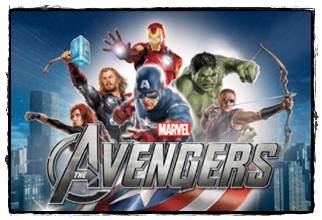 The hyped blockbuster The Avengers could well call himself as the ultimate superhero movie in a long time. Most people associate certainly very true marvel with a number of known and lesser-known superheroes with different powers, but all with the goal of saving people and the earth. In the movie The Avengers has simply gathered some of the most popular and inflated superheroes that together they will try to save the Earth.

Among other things, you meet Iron Man, Hulk, Thor and Captain America and many big name actor behind the characters in the film, such as Samuel. L. Jackson, Robert Downey Jr., Chris Hemsworth and Scarlett Johansson. That is the profile of Nick Fury, director of S.H.I.E.L.D which is an agency that works to preserve peace on Earth. But suddenly the threat from the outside, which means that the earth is no longer secure and therefore Nick Fury weld together a team that can work together to be able to fight against the enemy and save the Earth from going under. The Avengers is an action packed adventure from beginning to end with a lot of spectacular special effects, and it is well worth to be seen!

The Avengers Slot is a video slot from Playtech included in the popular series Marvel Slots. The slot machine has 5 reels, 20 pay lines and symbols represent among other things, super heroes Iron Man, Hulk, Captain America, Thor, Black Widow, Hawkeye and Nick Fury. The wild symbol is Nick Furys (S.H.I.E.L.D logo) and the scatter symbol is the Avengers logo. Just like in the movie The Avengers as Nick Fury recruits the rest of the heroes to stop Loki from destroying Earth.

There are five different bonus features in the game. The first is mini bonus Avengers Assemble triggered when Iron Man, Thor, Captain America and Nick shows up on the pay line simultaneously. You are awarded when a gain of 200x line bet. The symbols do not get in anyone particular order.

The main attraction of The Avengers Slot feature the Wall of Heroes. You trigger it by getting three Avengers logos anywhere on the reels. Here you can win free spins four different modes, all based on their respective superhero. You are first moved to a screen with 20 Avengers icons. There you click on the icons, and when you manage to match three of the same superhero, start the bonus game. When the bonus game is completed, you return to the Wall of Heroes screen where you can choose from the icons again. The operation ends if you are unlucky enough to click on the Loki icon. 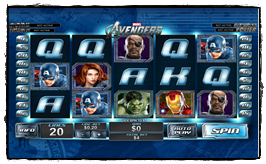 Everyone who plays the slots included in the Marvel series has the chance to compete for the progressive jackpots. The higher you bet, the more chance of winning the big jackpots. The four jackpots is Power, Super Power, Extra Power and Ultimate Power.

Hulk Loyalty – This feature gives you 9 free spins. During the bonus situation, be my wheel over the Hulk that make the entire reel wild. This increases your chances for big gains considerably. In Captain America Bonus, awarded to 9 free spins. Each free spin has a multiplier ranging from 2x to 5x. The first spins has a 2x multiplier while the other has a multiplier of 3X. The third and fourth spins have a multiplier of 4x and 5x. The process starts again at the fifth spinet with 2x and all the way to 3x, 4x and 5x. The final spin is at 2x.

Iron Man Bonus – You are awarded this 9 free spins with a multiplier that starts at 1x and then goes up by 1 after playing three free spins. Iron Man will move across the screen and increase the multiplier. This means that the free spins 1-3 with a 1x multiplier, free spins 4-6 has a 2x multiplier and free spins 7-9 has a 3x multiplier. A special feature of this bonus mode is that the Reactor symbol is always located on the center wheel and acts as an extra wild. Thor bonus is what one might call the best bonus mode in the game. You are awarded 9 free spins and you will get to see Thor throwing lightnings with his hammer before each free spin. He will also turn up to 5 random symbols into additional Wilds. If you want to win big in The Avengers Slot, it is this bonus mode you will succeed plot.

Everyone likes pretty much all superheroes? They are there when we are small and they are always with us in any way in the back of my mind, and because there are so many, all have their personal favorite. Therefore, it is perhaps not surprising that The Avengers is such a success, both on screen and in the form of a slot machine. As a game, you, as I said also get their hands on a lot of money if you could get lucky and win one of the four growing jackpots. But even if you do not win any of them can clink to the wallet, and The Avengers is a game that offers an exciting gaming experience with all your favorites from the blockbuster film.